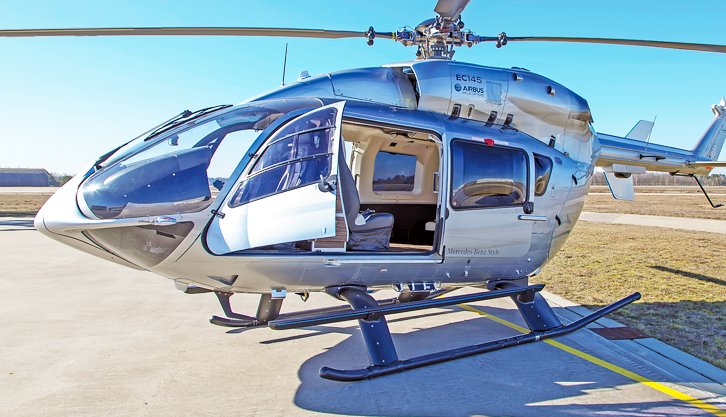 The Airbus Helicopters EC145 is the direct predecessor of the H145. It is a lightweight, twin-engine offering produced as the Eurocopter EC145 from 1999 until its rebranding under the Airbus umbrella as the H145 in 2014. More than 1,500 aircraft in the EC145 family have been delivered since its introduction, with extensive clientele in the executive transport, emergency medical service, search and rescue, utility, and military fields. The UH-72 Lakota, a U.S. military variant, has served as a primary training aircraft for U.S. Army pilots since its initial delivery to the service in 2006. Other military operators include Germany, Serbia, Thailand, and Hungary.

The EC145 was produced under an agreement between Kawasaki and Eurocopter (40 and 60 percent workshare, respectively). Kawasaki marketed the type as the BK117 C2 in the Asian market, and after production of the Mitsubishi Heavy Industries MH2000 ended, the BK 117 became the only civil helicopter produced in Japan. The joint production venture continues, with plans to manufacture the H145 through at least 2025.

Two Safran Arriel 1E2 engines generating 738 shaft horsepower each power the rotorcraft to a maximum cruise speed of 150 knots and a maximum operational altitude of 18,000 feet. Maximum takeoff weight, useful load, and maximum fuel weight are 7,903, 3,963, and 1,307 pounds, respectively. With its standard fuel load and no reserve, range at sea level and long-range cruise speed is 380 nautical miles.

The aircraft measures 42.8 feet long and 11.3 feet tall, with a rotor diameter of 36.1 feet. Cabin layouts vary by operator, with up to nine seats in a high-density passenger transport layout with two pilots. Emergency medical service layouts feature room for a patient litter and three attendees, while law enforcement and military configurations vary by intended role and operator. Cabin volume is 204 cubic feet.

*Range is the maximum VFR range of the aircraft traveling at Long Range Cruise speed with all passenger seats occupied.